Southern Massachusetts is still reeling from news that area teenagers attended a party last Friday night. “And this wasn’t a typical underage drinking party,” reported Tom Langford, on the scene in Plainville for NECN-TV. The theme was “Business Hoes and CEOs,” according to police, and “several of the youths were dressed up in suits, ties, miniskirts, and other office type attire.” 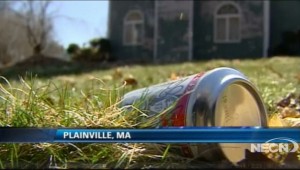 Behold the amazing ledes. “They may have been dressed like adults, but most of them were not,” wrote John M. Guilfoil for the Boston Globe. “Now they are facing grown-up charges.” All 53 partygoers — mostly between ages 17 and 20 — were arrested, loaded into vans, and processed as criminals. Even if they weren’t drinking.

Plainville officer William McEvoy summarized his department’s enforcement rationale as follows: Whether or not you partake in libations, “if the police show up, you can still be arrested for minor in possession of alcohol. [sic] So you shouldn’t even be there in the first place.”

Cops in Plainville have maintained a zero-tolerance policy toward underage drinking for two and a half years now, ever since 17-year old Taylor Meyer drowned in a nearby swamp after a night of partying. “What makes this case most disturbing,” Janet Wu of WHDH-TV in Boston told viewers, “is the tragic history this town has with these kinds of parties.” Reporter Sorboni Banerjee interviewed the girl’s mother, Kathi, describing her as “hearbroken” upon seeing the list of people arrested, many of whom were classmates of Taylor’s. “Why wouldn’t it stay with them?” Kathi Meyer asked.

To recap, here’s the logic: Anytime anyone between the ages of 15 and 22 drinks at a party in Plainville, Massachusetts, it should be considered an affront to the memory of Taylor Meyer.

By my count, there have been at least five local television segments devoted to the incident. FOX Channel 25 plastered a “Teens Gone Wild” graphic on the screen as its anchors cheekily mused about the troublemakers. “I don’t know, kids aren’t learnin’ their lesson,” anchor Kim Karrigan said. “It’s like these kids just don’t get it.” MyFoxBoston.com courageously posted the names of everyone who was arrested, including several minors. 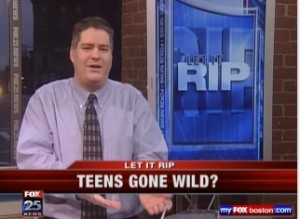 “I just got suspended from my job because my boss saw my name in the paper,” one of the arrested girls, who asked that I withhold her identity, told me. “Parties get busted like this every weekend — the media’s making it a huge deal because of Taylor Meyer. We weren’t partying in a swamp. Her story is irrelevant beside the fact that she’s from Plainville.”

“Some of us had court today,” she went on. “They filmed us and it was on the news. People have been texting me nonstop, saying I just saw you on the news! It’s humiliating.”

An electronic sign in front of the Plainville police station reads, “Zero tolerance, zero chances: You drink under 21, you lose.” The department seems to view “losing” as being arrested on the spot, having your name and photo circulated across the internet, and losing your job. Certainly seems like a reasonable way to address underage drinking.

Maybe my priorities are out of whack, but this is the kind of thing that makes me especially depressed about America.