There is a Family Radio affiliate located in West Orange, New Jersey, wherein prophesies of Saturday’s impending rapture are transmitted to portions of the New York metropolitan area. Comcast customers can view Harold Camping’s daily Open Forum program on Channel 66. In the world of atomically-precise eschatological predictions, one must admit, the Family Radio people are unusually organized and savvy. This isn’t some rag-tag operation — billboards are plastered all over the place, most urban areas seem to have a crew of proselytizers, and their TV channel is only a few clicks away from Turner Classic Movies.

It’s difficult to fathom what must be going through the minds right now of people who genuinely believe that on Saturday they will be whisked into the sky to dwell with Jesus and oversee the destruction of nonbelivevers. With each passing moment, oblivion draws nearer; the path God laid out for humanity at the beginning of time was destined to culminate on this date, at this hour. All the dictums of Old Testament prophets were ultimately harbingers of the final reckoning, and Jesus’ sacrifice was made so we might realize that Saturday is the cosmic deadline. All the strife and bloodshed and suffering of human history — everything will be vindicated in three days. This sick, hopelessly transient existence will come to an end, at long last. 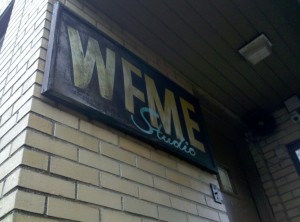 A 28-year old man named Jason was the only person at the West Orange office yesterday afternoon. He wore a homemade “May 21, 2011” t-shirt, and his right bicep was tattooed with a verse from the Book of Isaiah. I couldn’t tell which one in particular, and was too embarrassed to ask. He told me he’d been working at the station for five years, and lived in an apartment complex a few blocks down the road with his wife and two young children.

“So, only a few days left,” I said to him. “Yeah…” Jason replied, a bit ruefully. “It’s unbelievable.” His parents were devotees of Harold Camping, and he’d been immersed in the organization for as long as he can remember. Video of the patriarch leading a Bible study streamed on monitors in the background as we spoke. Jason didn’t know whether his children, who are unable to consciously accept Jesus as savior, will be raptured, and said speculation one way or another is an affront to God.

I noticed a calendar hanging in the control room. Something was written below the May 21 box in red pen, so I went to take a closer look. “6:00am — switch to KFL.”

What? I didn’t understand. Why would they be making preparations for anything after Saturday?

Jason said that there are many people in the Family Radio organization who reject Harold Camping’s May 21 prophesy. This includes the West Orange station manager, who had scrawled the reminder. He thinks the entire thing is ridiculous, and was looking ahead to next week when they’d need something new to broadcast.

Jason showed me a photo that the station manager had displayed in another room, featuring a silly clown shrugging flamboyantly, with “May 21, 2011” written overhead. Another photo was tacked on a bulletin board, with the faux-headline “May 22, 2011: Mass Committal to Loony Bin” and an amateurish photoshop job of some people in straightjackets.

Not only does the station manager reject the May 21 prophesy, I asked Jason — but he openly mocks it?

So was the case. Those who affirm the rapture date are actually in the minority at Family Radio, Jason told me. Many people had left the organization after the tenor of Camping’s message had changed years ago. Is the station manager a Christian, I asked? “He claims to be,” Jason said.

On the way out, Jason offered me some literature from his car: 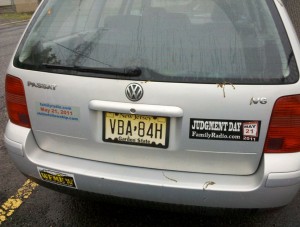 He plans to spend Saturday at home with his family.