Look at that menacing, vulgar smirk on the face of Deputy Inspector Anthony Bologna as he indiscriminately pepper-sprays peaceful protesters who are complying with his order to turn around and walk away — and who comply even though they’re merely demonstrating on a public sidewalk, which is entirely lawful. Look at the sick way he derives pleasure from inflicting pain on others. In most civilized societies, this is known as sociopathic behavior, and yet when such behavior is exhibited by a high-ranking NYPD supervisor, his actions get spun away by PR-flacks as “appropriate” and “judicious.” Until more video comes out, that is.

We now have reason to believe that Tony Baloney is in fact afflicted with severe psychiatric problems. Does this look like a sane man to you? 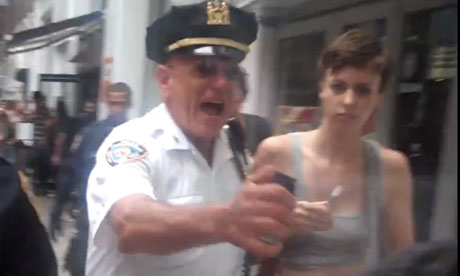 Look at the utter disgust just oozing from Bologna’s pores as an outstretched hand sprays extremely painful gas at non-violent protesters, who posed no threat whatsoever to him or anyone else. The most these people were guilty of, so far as we can tell, was obstruction of traffic — certainly not a crime anywhere serious enough to warrant the kind of violent response that Bologna and his colleagues carried out.

Again, the people Bologna is pictured nonchalantly dousing with a chemical agent were on the sidewalk, where they can legally set foot, and they were following his (probably unlawful) order to move away. Bologna’s only possible motivation for deploying the pepper-spray, then, was to harass and abuse these people — contra official NYPD credo, of course, which was that Bologna acted out of “his concern for the safety of officers under his command and the safety of the public.”

Yeah right. The people he attacked were either already ensconced by an dystopian-looking orange net or complying with the man’s order to vacate. So Bologna’s real motivation for using pepper-spray could’ve only been to exact vengeance on a bunch of no-good kids, all of whom he undoubtedly considers scum.

Genuine respect for the rule of law means that all citizens are treated equally under the law. Newsflash: If you assault people who have not endangered anyone, you must be held legally accountable for your actions. Unless, of course, you’re a police officer, in which case your boss will repeatedly make up excuses for you — even if it means contradicting every available piece of evidence. Your boss will also blame the victims, as Police Commissioner Ray Kelly did when he said “some” protesters were acting “tumultuously” — though Kelly never bothered to cite evidence supporting that claim or how it related to Bologna’s liberal use of pepper-spray.

Since some of Bologna’s fellow officers — the blue-shirts — were quoted as incredulously exclaiming “you just fucking maced us!” following the incident, hopefully they will feel compelled to testify against this psycho in a court of law. My favorite part of Bologna’s background, besides the shockingly perfect name, is that his ordinary beat was “counter-terrorism” — which I guess is where he honed his crowd-management techniques. Maybe he was in charge of the secret weapon the NYPD has stowed away to shoot down airplanes.

On the Brian Lehrer show Tuesday, Eugene O’Donnell, a professor of law and police science at John Jay College of Criminal Justice and former cop, was asked about police tactics at Saturday’s demonstration. “I haven’t seen these protestors on any videos doing anything that looks unlawful to me,” he said. “But the reality is some of these protestors do, in some other contexts do look for confrontation with the police, look to spark the police lashing out and provoke events. And that becomes quite a bit more complicated.”

O’Donnell is essentially saying that police are briefed to prepare for the worst possible scenario — protesters outright attacking officers — because it happens in “some other contexts” — a deliberately vague and amorphous statement if I’ve ever heard one. He went onto say that it’s “becoming more and more common,” for police to corral protesters who have committed no crime with orange nets. Moving forward, commanders merely need to decide how to “calibrate their response.” He then invoked “the lessons of London” to justify a heavy-handed police presence.

This is classic doublespeak, and so obviously insidious. Bologna may have been the only one who got caught, but is there any doubt that his seething hatred of protestors *of any sort* is shared by many colleagues and subordinates? Bologna’s deranged acts of violence speak to a larger problem that plagues not only the NYPD, but departments across the country. Bologna is no street level cop — he’s a white-shirt, a supervisor, someone with influence over policy. Do we seriously think that he’s just an aberration? Are we comfortable with O’Donnell appearing on the radio to conflate the looting and criminality in London this summer with peaceful protests on Wall Street? Here’s the sad reality: community policing in New York City and much of America is simply dead.

By dispatching hundreds of cops to subdue and restrain the ability of people to move freely in the city, the police set themselves up for an inevitable violent confrontation. I was reminded of the brutish-looking SWAT team that swarmed the site of Troy Davis’s horrendous execution in Georgia because protesters dared to assemble outside. As with the situation in New York, another otherwise peaceful assembly was made tense, frightening, and dangerous by police. Maybe the commanders who issue these orders secretly crave such confrontations — get their jollies on from it. Inspector Bologna certainly seemed thrilled by the opportunity to aimlessly pepper-spray young women. He was later photographed laughing at his text messages. Maybe he told a buddy about the fun he was having.

By my count, at least four journalists — including a PBS reporter officially credentialed by the city and a photographer whose work has appeared in the New York Times — were wrongly arrested, assaulted, and/or pepper-sprayed by officers. Here is one being apprehended for the crime of filming a young man’s act of civil disobedience and subsequent arrest. Of course, police officers grab the journalist’s arms as she attempts to document the arrest and banally tell her “stop resisting” when she is doing nothing of the sort. Just another arbitrary charge to levy against her in court if necessary. Where are all the conservatives who profess a desire to “get back to the Constitution” on this? Why aren’t they more vocally alarmed about the state-sanctioned mistreatment of people who are attempting to express their Constitutional rights to free speech, freedom of the press, and peaceful assembly?

It’s worth noting that very mainline media outlets have been pushing hard with the Bologna story. The New York Times said he “looked as if he were spraying cockroaches.” And Lawrence O’Donnell has made several editorials that are exactly on point:

By the way, how much longer are progressive and libertarian journalists going to jeer at the Wall Street protest, notwithstanding its support from figures like Glenn Greenwald, Noam Chomsky, Cornel West, Chris Hedges, Matt Taibbi, Tavis Smiley and others? Or is the endorsement of David Gergen, Joe Scarborough, and Donna Brazile necessary to legitimate it?

Progressives in particular can scoff however much they like, but they are acting against their own interests. No movement is perfect, especially in its incipient stages; that’s a bad reason not to be supportive. Maybe their ire would be better directed at Deputy Inspector Anthony Bologna, who — as James Fallows at the Atlantic documents — has brought shame on our country with his thuggish disregard for human dignity.